"Medias in res" is a latin term for when the story starts in the middle and not necessarily at the beginning. You join us here at LARK'S MEADOW FARMS in the middle of a story that began long ago and is far from its conclusion. We are learning along the way and we hope that you will come along on our journey. There is much to explore in the world of cheese!

We are happy to announce that we have been accepted as a new vendor into the SLC Farmer's Market! Thank you to all who have supported us in this endeavor. We are excited to meet new friends and enjoy the flavors of Utah together. We look forward to seeing you every other Saturday. Come join in the fun and grab a wedge of cheese!

Starting on June 9th and going until October 27th from 8 am to 1 pm on Saturdays.
And on Tuesday evenings August 7th to October 23 from 4 pm to dusk.

If you want to learn more about this wonderful market, check out their new website. 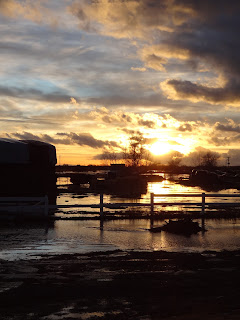 Life on a farm is a lesson in change. One day it is warm. One day it is snowing, bitter and icy. The next day a warm wind turns the whole farm into a puddle. The meadow becomes a lake and the roller coaster brings the realization that spring is indeed around the corner. 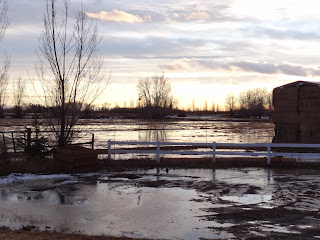 Rare Cheeses of the World

The next time you get a hankering for some delicious cheese and the grocery store down the street isn't cutting it.... literally, hop onto the website for Artisinal Premium Cheese and just see if you don't find something to tickle your fancy. (Click the logo below to be magically transported.)

While you are there check out a recent blog written by Max McCalman. As one of the most famous and passionate cheese experts around, Mr. McCalman lectures about cheese, writes books about cheese, judges cheese and otherwise is a champion of cheese. What a delight to discover that we are on his short list of best cheeses not only in the country, but in the world!

Follow this link to see how Dulcinea, Helen and other cheeses stack up in his opinion.

With his list in hand you should be ready to sample some mighty fine cheeses.
Posted by R.R.Russell at 9:31 PM 1 comment:

How low can you go?

We have been counting our many blessings with this mild winter. I have continuously been bracing myself for worse weather and it has continued not to come. We have been able to get a lot done, but last week when we got some real snow the girls and I couldn't resist. We bundled up and headed outside to discover perfect snow for a snowman. With my two cheerleaders looking on in confusion and then amazement, I launched into a one woman mission to make a good sized snowman. The girls, not having had this experience before seemed to think that I had gone mad, but then they got excited when they started to understand that it was like the song.
Ginny started humming along and then chanting the words "snowman, snowman" and then mumbling off into more humming. Apparently the rest of the verse had eluded her. With Dad's help I lifted the second piece on and then the head. There he was, quite large in stature and impressive. The girls, however, were losing their enthusiasm. So, I hastily added some branches for arms and headed inside to snuggle by the fire, thinking that we would finish our masterpiece the next day when the girls would have renewed interest in being outside. I had not taken into account the unfortunate position that I had left the snowman in. The storm quickly passed and sunny days abounded. Day after day he faced direct assault from glittering and brilliant sunlight. Ginny soon figured out the other part of the verse "melting, melting, small small small." 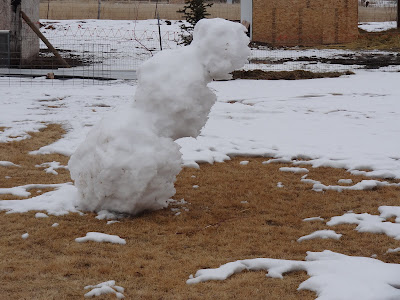 Not only was he melting, but he was leaning. It started to catch peoples' interest. How long would he last? I was tempted to dress him like he was doing the Limbo, complete with one of Kendall's Aloha shirts, but I didn't dare to touch him. 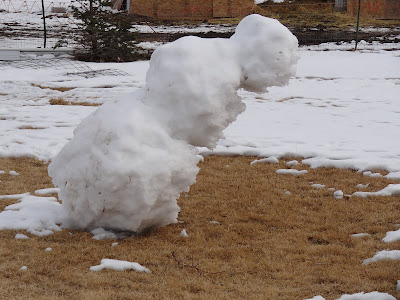 He kept getting lower and lower....
I predicted that we would not fall, but melt at a rate that he would shrink down until he was gone. Alas the elements were against him and a night of rainstorms finally led to his demise. 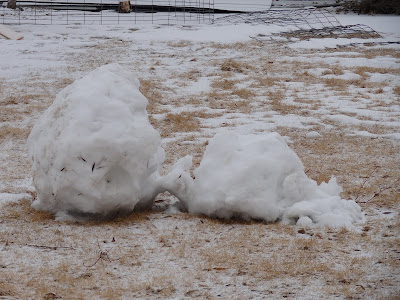 So Let It Be Written 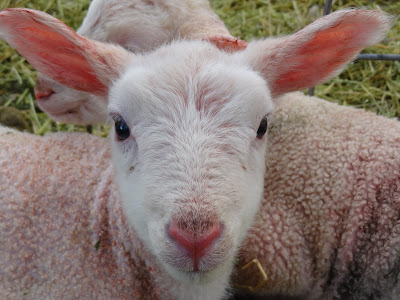 It is official. In the history books of Lark's Meadow Farms the first day of lambing for the year 2012 shall be February 3rd. At 6:00 pm the first two lambs made their appearance without any assistance. With two bouncing and strong ewe lambs coming from one of our best milkers, we are off to a great start. We are hoping for a strong crop of ewes this year and excited that these two came just right. 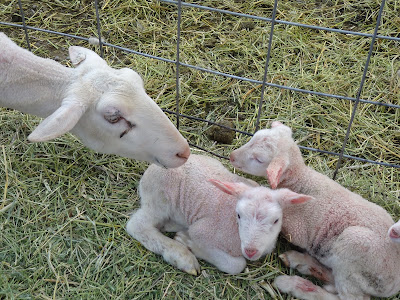 At 3:00 am today two ram lambs came without any fuss and we know that we are into it. This little guy is sure a cutie. His mother has one of the more annoying sheep voices of any sheep that we have owned. We are hoping it doesn't carry to the next generation... 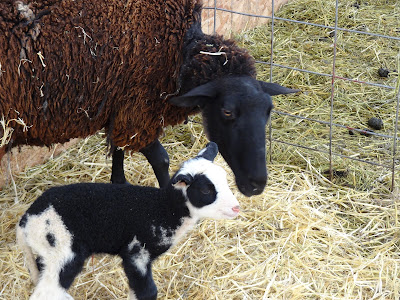 With sixty ewes we are hoping for at least 120 lambs this year and it is sure to be an adventure from start to finish.
Posted by R.R.Russell at 10:38 AM 1 comment: 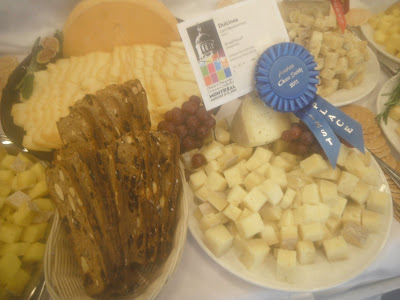 The 2011 American Cheese Society Conference was held in Montreal last year. Kendall went and represented Lark's Meadow. With over 1700 entries it was quite a production and quite a competition. As always, ACS pulled it off in style and provided an amazing experience for cheese lovers from all over the world.
We were absolutely delighted that Dulcinea received two awards in the judging. In the category for Aged Sheep's Milk Cheeses, Dulcinea Extra Reserve took 3rd place. In the category of Sheep's Milk and Mixed Milk Cheeses Aged over 60 Days, Dulcinea took FIRST PLACE!
We were honored to receive this recognition for Dulcinea and as the last few wheels of Dulcinea from the 2011 season are being shipped off and we are setting our sights for the next season we are excited for what is to come.
Congratulations to Kendall our cheesemaker, Mark and Emily the owners and everyone at Lark's Meadow for earning these prestigious awards.
Posted by R.R.Russell at 3:52 PM No comments:

Pleased To Meet You 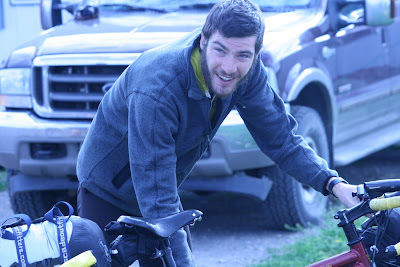 As people all over the country are trying our cheese and finding us online, one of the fabulous benefits that we enjoy on the farm is meeting new people and making new friends. We were delighted to meet a couple who have been traveling across the country ON THEIR BIKES, visiting farms and learning everything they can in their intense summer tour. Kevin Donley and Caitlin Martin rode there bikes all the way from Philadelphia to this side of the country. One pedal, one farm, one park at a time... That is the way they are doing it. There quest is to learn about local farms, the production of food, how to use food in good recipes all while enjoying their love for biking. 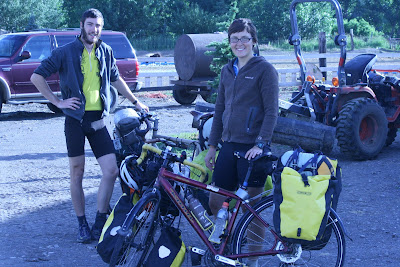 They called us when they were a few days out and asked if they could visit. What was expected to be a short tour, turned into a few days and all of us on the farm were sad to see them go. When they got here, they were in desperate need of a shower and some rest. We introduced them to our family tradition of tinfoil dinners made in the fire pit and as conversation ensued. We quickly found that there was much we had in common. Topics ranged from sheep teets to educational issues to favorite ice cream flavors.

In spite of their exhaustion Kevin and Caitlin were diving in to try things out (like milking sheep at 4:30 am, making cheese and pitting cherries) on the farm. New friendships blossomed. They were even gracious in the onslaught of our children's affections, bravely dealing with all the little girls who were vying for their attention. We talked them into staying as long as possible and were sad to see them go, but we admire what they are doing and didn't want to deter their progress on their tour.

If you want to see what they have been learning about food, agriculture and our farm check out the blog at http://headwind2011.blogspot.com/2011/07/cheese-thats-goodidaho.html.
Posted by R.R.Russell at 12:41 PM No comments: